A letter to President Barroso of the European Commission 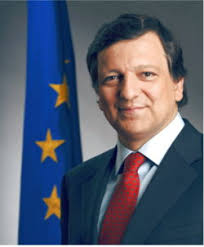 The following is a letter I have sent to President Barroso of the European Commission.
I feel that many comments are being made  about the loans being extended to Ireland by the EU and the IMF, which suggest that Ireland alone has a responsibility for what has happened, and that Ireland alone,  is being bailed out by the generosity of others.
This is not the full story, and I try to put the other side of the story forward, in my letter below to President Barroso.
Dear Jose Manuel,
I read your response to questions in the European Parliament about the Irish fiscal situation, in which you seemed to be suggesting that this situation arose solely because of irresponsibility in Ireland.
I agree the main responsibility does rest with Irish institutions, the Irish Government, the Irish Central Bank , the Irish banks, and the Irish individuals who borrowed irresponsibly.
But you should know that this is not the whole story. British, German, Belgian, American, French banks, and banks of other EU countries, lent irresponsibly to the Irish banks in the hope that they too could profit from the Irish construction bubble.
They too had available to them all the information about  spiralling house prices in Ireland, but they still lent the money.  These banks, who lent to the Irish banks, were supervised by their  home Central banks, who seemingly raised no objection to this lending, which was so  ill advised.  Their  home Central Banks also had available to them  the same information, that everybody else had, about the imbalances in  the Irish  housing market and the disproportionate increase in house prices   relative to incomes in Ireland.
So these non Irish Central  Banks must take some share of responsibility for the mistakes that were made. Yet the non Irish banks, who so foolishly lent to the Irish banks,  are now being spared any share in the losses, because  the Irish taxpayer is bailing them out.
I feel you should acknowledge that. You did not do so in your statement in the European Parliament
I also believe the European  Commission was involved, under the Treaties, in some responsibility for supervising the Irish economy,  and that  it too had full information on the obvious imbalances I refer to above. You ought to have acknowledged that responsibility of your own institution, which the Commission shares with ECOFIN.
What did the Commission do at the time about the Irish housing bubble?
What did the ECB do?
Nothing very effective, it seems.
Some reflection on that would be appropriate to accompany your fully justified criticism of Irish failings.
The fact  also is that interest rates in Ireland were too low in the first years of the euro. They were kept low by the ECB, because of the needs of other EU countries, which were not booming in the 2002 to 2007 period as Ireland was. That is also, in part, a European responsibility, although, of course,  the Irish authorities should have found other measures to compensate for the fact that the ECB was pursuing interest rate policies that were  unsuitable to Ireland.
You were right in the European Parliament to remind the Irish people of their recent policy failings, but you should tell the whole story, not just one side of it
Ireland’s bank guarantee in 2008 may have prevented a  Europe wide banking collapse in 2008. You did not refer to that possibility at all.  Do not forget Credit Anstalt in 1931, or Lehman Brother in 2008.
I hope you will find an opportunity to redress the balance in a future statement.
Yours sincerely
John Bruton  (former Taoiseach and former  EU Ambassador)
Print Entry