Are Two Days Meetings, Once a Quarter, Enough to Run Europe? 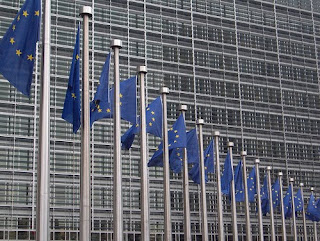 The December Summit of the EU agreed to introduce an amendment to the EU Treaties to create a permanent bail out fund for Eurozone member states, that will be activated “if indispensable to the stability of the euro area as a whole”.
This is quite a high bar to cross. Suppose there is a financial crisis affecting the majority of countries in the euro zone, but one large country has insulated itself against this economic shock by building up large savings and preventing its banks from lending more than a very conservative amount. Would the existence of that one such country in the euro zone be legally sufficient to prevent the bail out fund being used then, because the crisis was not affecting the euro area ”as a whole”?
This wording in a Treaty will be very severe and may mean that countries in difficulty will not use this fund at all but will prefer to seek help from the IMF, because the IMF will look at the situation of individual countries, not at the euro area as a whole.
It would appear that this announcement has not calmed the markets. If so, this is because it is a one sided solution. It deals with helping countries avoid collapse, but it does so by enabling them to add further to their debts by borrowing on the strength of the credit of other member states who have a better credit rating.
What it does not do is provide a vision of how economic growth will be restored , so that a flow of funds will be created to repay the debts. The EU heads of Government have produced tons of paper on this topic in the past, notably under the so called Lisbon strategy. These papers have been full of pieties about “reform” and “flexibility”, but have lacked specifics and rigorous follow up. I always had reservations about the Lisbon Process because it lent the good name of the EU to systematic evasion of responsibility in areas where the EU actually had no power to act under the Treaties, and thus no responsibility for failures.
My own view is that the European Council, which is a body consisting of 27 part timers, is not a body that is capable of the sort of rigorous, sustained, and self critical thought that is needed to restore economic growth at this critical moment in history.
27 heads of Government, all of whom are already fully employed managing their own countries , can only turn to EU affairs in their spare time, which may be on the plane on the way to the meeting in Brussels. The European Council does have a small secretariat and a fulltime Chairman, but that is not enough to make up for the fact that the people who make the actual decisions are all part time Europeans. Arguably the European Commission is available to help but its role is sidelined by its institutional rivalry with the Council.
We are facing more than a financial crisis. We are facing a crisis of the welfare state in ageing societies. We are facing a crisis of globalisation, and potentially even a crisis of the efficacy of European democracy. These subjects need to be tackled together in a sustained way, with a real sense of urgency. Decisions need to be taken now, that point the way forward for Europe for the next ten years. Leaders need to sit together until they have reached a full mutual understanding on all that needs to be done, the whole job, not just bits of it.
I believe that the members of the European Council from the 16 euro area countries should be  recalled, in the days after Christmas before the markets get going again in the New Year, and work together for a week or more with all the relevant members of the European Commission, to put together a ten year strategy for political and economic reform to facilitate the economic revival of the entire euro zone.
On the narrower issue of bank debts, the conclusions of the summit are also one sided. For example, the Irish banks owe 113 billion euros to German banks , 107 billion euros to British banks, and a large amount to Belgian banks. If mistakes were made in borrowing this money by the Irish banks, mistakes were made in lending it too. The lending banks were regulated in their home countries, not in Ireland.
While the Irish banks were regulated by Irish authorities who did not do their job properly, Irish taxpayers were not parties to either the lending decisions, nor to the borrowing decisions. Yet they are taking on the full responsibility of ensuring that the loans are repaid. They are getting new loans to help them do this, but they will have to repay those loans in full. There is a lack of symmetry here, to use a mild term.
Of course something along these lines was needed to prevent the problems of the Irish banks infecting the German , Belgian and British banks too. In protecting those banks one is protecting German, Belgian and British taxpayers. So surely this is a European responsibility, as well as an exclusively Irish one?
This is the sort of issue that it would take a lot of time to work out fairly and proportionately, time that the busy part time Europeans on the European Council do not allow themselves to take