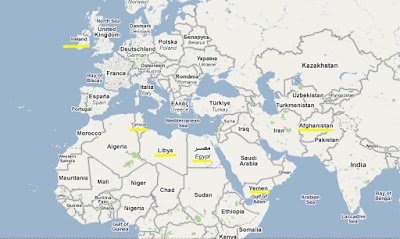 I attended a conference in Washington this week where some of the major  security problems of the worlds were discussed.  A few things stuck in my mind which may be of interest to visitors to this website
A NEW ARAB WORLD
The most important thing to happen this decade is the wind of change in the Arab world.
The Arab world has a huge youth population, educated but  with poor economic prospects. Authoritarian methods could not control them when they had independent access to communication through the social media and Al Jazeera.
The peaceful character of the demonstrators was remarkable. Even in Yemen, where guns abound, they   have been peaceful.
Egypt will soon have free elections, as will Tunisia. This means that everybody, including Europe, the US and Israel, will have to pay attention to Arab public opinion in those two countries. It will no longer be possible to do deals with leaders over the heads of the public.
BUT NOT EVERYWHERE
In other countries the development will not be so benign.  There will be no peaceful transition to democracy in Syria or Bahrein. Libya seems headed for a stalemate.  In the past, Al Qaeda recruited many suicide bombers from the Benghazi area, and one cannot be sure how well “liberated” Libya  will develop. The Western intervention does not have a clear end point. I wonder did people really  believe that Khaddafi would  go quietly, like Mubarak and Ben Ali, once the  West intervened.
There was a general view that the democratic revolutions have restored Arab pride.   But the economic problems the new governments will face will be severe, especially in Egypt, where the decline in tourism and the increase in food and fuel prices will hit the poor hard.  Freedom on its own does not put bread on the table.
Iran will lose some ground because it will have fewer grievances to exploit. Turkey, as a democracy with Islam inspired Government, may become a role model, and see its influence increase.
THE PALESTINIAN PROBLEM IS STILL THERE
The Palestine question was not a central issue in the demonstrations, but a democratic Egypt may make tougher demands on Israel, in regard to Israeli settlements on Palestinian land, than the military regime was prepared to  do. President Obama started to do something to create a resolution of the Israel/ Palestine conflict at the beginning of his Administration, but now has given up, having failed to get Israel to stop building settlements that preempt the possibility of a viable Palestinian state.
Meanwhile, it looks as if Saudi Arabia, by supporting the regime in Bahrein, is opposing democratic change. Saudi oil is critical to western prosperity, now that supplies from Libya are interrupted.
AFGHANISTAN…………….A BELGIAN PRECEDENT?
There was pessimism about the achievability of the goal of NATO handing over security to the Afghan Government by 2014.  While progress is being made, the problem will not be resolved by 2014.
The cost of present security comes to 8 times Afghanistan’s GDP!  100000 NATO troops are in Afghanistan, but only 100 Al Qaeda operatives, and none of the Al Qaeda leadership. The leadership, and most of the operatives, are now in Pakistan.  The Pakistani army has an ambiguous relationship with some of the terrorist groups.
If NATO troops are not to remain in Afghanistan indefinitely, a new approach must be found.   One  solution suggested was  a treaty between all its neighbours guaranteeing Afghanistan’s military neutrality, was suggested.  This is worthwhile and original thought. It was the approach that led to the creation of the state of Belgium in 1830. Previous to 1830, the territory that is now Belgium had been fought over for hundreds of years.
For this approach to work in Afghanistan, there would have to be an agreement between Pakistan, India, Iran and China, with the support of the US and Russia. It might be something that all Afghanistan neighbours might accept. An unstable failed state in Afghanistan is bad for all the  neighbours.
But talking to Iran might be difficult for the United States, in light of Iran’s nuclear programme, which has the potential to change the balance of power in the region.  Israel is convinced that a nuclear Iran would constitute a mortal threat. But an endless NATO war in Afghanistan is unthinkable, and  financially unaffordable.
Print Entry

THE MINISTER FOR EDUCATION’S INITIATIVE

THREE BOOKS THAT LOOK AT WHAT WE FACE TODAY