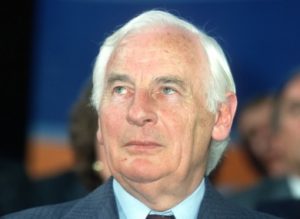 The loss of Peter Barry will be felt deeply throughout Ireland, but particularly in the city of Cork to which he devoted a life of public service.

Peter represented all that is best in Cork, its culture, its pride and its intimacy as a city. He knew, and was loved and respected, by his neighbours in Blackrock.

Just as I never heard Peter Barry say a bad word about another person, I never heard anyone ever say a bad word about him. This was perhaps the key to his success  as international diplomat on behalf of Ireland. He won respect without ever needing to command it. The inherent dignity of his personality sufficed to ensure that he always got a fair hearing for his views.

He was a crucial figure in the history of Fine Gael. At a time when Jack Lynch was dominant in Munster politics, Peter Barry’s election to the Dail in 1969 reminded the people of his province that there was an alternative, ready to govern.

That alternative government came to office in  March 1973, under the leadership of Liam Cosgrave, and Peter Barry was among its senior cabinet members. Serving in the portfolios of Transport and Power and in Education, he held his own in a government of many talents.

Among the practical matters he promoted as Minister for Transport and Power, was the completion of rural electrification. Even then, there were places in Ireland, like the Black Valley in Kerry and Ballycroy in Mayo that, because of their remoteness, did not have a supply. In 1976 put through the legislation to ensure that those remote areas at last got that requisite of a modern life, an electricity supply.

He was briefly Minister for Education, and in that capacity, I was his parliamentary Secretary (Minister of State).

In Education,he continued the implementation of the important reforms of his predecessor Dick Burke, establishing management boards for schools and the Transition Year.

He was deeply committed to the Irish Language and to all aspects of Irish culture.

But he also had an interest in the development of the European Union. He supported the late professor Jim Dooge, who chaired the committee at EU level that lead to Single European Act, which was the reform of the EU treaties that created a genuine single EU market for goods and services.

As has been pointed out by others in the last two days, his central achievement as Foreign Minister was the negotiation of the Anglo Irish agreement.

This agreement ended the international isolation of the nationalist minority in Northern Ireland. It created an institution, the Anglo Irish Conference, that ensured the governments in London and Dublin were required to work on ongoing basis to ensure fair treatment of both communities.

The very existence of the Conference, created by the Agreement, provided a safety valve for the discussion of differences that inevitably arose, from time to time, between the two governments. Rather than these differences becoming the subject of megaphone diplomacy, discussion of them could  be referred to the next meeting of the Conference. This allowed time for things to cool down. In a sense, this typified Peter Barry’s approach to politics. He combined conciliation with firmness and his calm demeanour lowered the temperature and allowed others to take the time to find a more constructive way forward.

Looking back over his early contributions in the Dail debates. I am struck by the number of occasions of which he raised the issue of unemployment, particularly the level of unemployment in Cork.

During our time together in cabinet in the 1980s, there were a number of major setbacks to employment in Cork, notably the closure of Dunlops and Fords. As the Minister responsible for employment at the time, I remember well the persistence of Peter Barry’s representations to preserve employment in Cork. It was partly as a result of his efforts that an Employment Task Force for Cork was set up at that time, and I believe some of the initiatives taken by that Task Force laid the foundation the tremendous industrial renaissance that took place in Cork and around Cork Harbour.

Peter Barry was immensely loyal to his friends. He was loyal, in every possible way, to each of the Fine Gael leaders under whom he served. I have particular reason to remember that deep appreciation.

I believe that the loss of his wife, Margaret, was felt very deeply by Peter. They were an exemplary couple in every way, and Margaret’s support of Peter in his political life was vital to him. They inculcated in their children a deep sense of public service.

Peter Barry was a credit to Ireland and to Cork.

THE IRISH PARTY RESPONSE TO THE RISING