The greatest of all englishmen 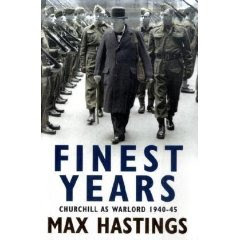 Finest Years: Churchill as Warlord 1940-45 Max Hastings (Harper Press, £25)
Max Hastings starts his book, perhaps with a view to promoting sales among patriotic British readers, with the claim that Churchill was the greatest Englishman and one of the “greatest human beings of the 20th century, indeed of all time”. The book itself certainly demonstrates that he was human, human in his self-centredness, but also human in his sense of humour. It draws a contrast with Roosevelt, who emerges as distant and non-committal, unwilling to get too far ahead of US public opinion until America was attacked at Pearl Harbour.
Despite the fact that President George W Bush had a bust of Churchill in the Oval office, US public opinion at the time, and Republican opinion in particular, was very sceptical of Churchill and of the British war effort against the Nazis.
After the fall of France in 1940, only 30pc of Americans thought the allies had a chance of winning in the end. In 1941, before the Pearl Harbour attack, Americans were far more supportive of Roosevelt’s oil embargo against Japan, than they were of his lending supplies to Britain. Even as late as 1944, far more Americans expected Chiang Kai-shek’s China to be a more trustworthy post-war ally than Britain would be.
Against this background, Churchill had to fight an uphill battle to get the US help, which he believed was the only way he could enable his country to hold out. He faced scepticism from Americans who felt he was trying to use US resources to preserve Britain’s rickety old empire. But he persisted and got the support he needed.
British opinion was firmly behind him in 1940, but as soon as the invasion threat eased, he faced more difficulties at home. In 1932, 48,000 man days were lost through strikes. In 1940, when Britain was under immediate threat of invasion, 163,000 days were lost. But by 1944, the annual toll of days lost through strikes rose to 1,048,000 days. This shows the limits to Churchill’s capacity to rally his people.
Churchill, for reasons not fully explained in this book, was very nervous about the invasion of France, and believed that the best way to defeat the Germans was to go up through Italy and on to Vienna. He was proven wrong in this judgment.
It is also clear now that it was in neither of these theatres that Hitler’s military machine was broken. That happened on the Eastern Front, at Kursk in 1943, long before D Day in June 1944. After Kursk, it was only a matter of time. But D Day did save Western Europe from Soviet domination, for which a great debt of gratitude is owed to the Americans.
This is a well-written book. It makes great use of newly released archives and throws much light on how today’s Europe came to be what it is.
Book review by John Bruton
Print Entry

A week in Spain.

Crisis, An opportunity to make changes