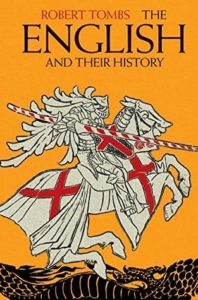 In a quest to understand English nationalism, which is currently manifesting itself in a campaign to take the entire United Kingdom out of the EU, I have been reading as much English history as I could find.

One of the best books I have found particularly good is “The English and their History” by Robert Tombs, who is an historian in Cambridge University specialising in Anglo French relations.

Now that the Empire is over, and the Scots have been granted the possibility of leaving the United Kingdom, the English, naturally enough, are focussing on their own distinctive story, as a means of identifying who they are, and what makes them different.

Tombs make a number of claims that are of interest in this context.
He says that English and Irish(Gaelic) were the two most developed vernacular languages in Europe in the seventh Century AD.

The Viking invasions seriously disrupted English society from 793 onwards, and Viking invasions, from their bases in Dublin, were a particular problem on the west coast of England.

But the Viking invasions still left the English power structure in existence.
This was not the case with the Norman Conquest, which was accompanied by land grabbing Norman French colonists, who decapitated the traditional English society, dispossessing the native English landholders. In many respects the results of that conquest on land ownership in England survive to this day.

On the other hand, the English system of common law, based on judges’ decisions in individual cases, rather than on statues or codes, survived. Tombs claims the common law was the first national system of law in Europe.

The Reformation affected England very differently to the way it affected Scotland and Ireland.

In England a compromise religion, incorporating elements of Protestantism and Catholicism, was imposed from the top by the King.

In Scotland, Protestant Presbyterianism grew from the bottom upwards but was never embraced by the Scottish royal family(the Stuarts).

In Ireland ,the Protestant Reformation was rejected by both the Old English settlers and the Gaelic Irish, but for different reasons.

Prior to the Reformation, the monasteries in England provided a social welfare system for the people. When the land of the monasteries was taken over by the King, a substitute Poor Law system was eventually introduced in 1601.

The Parish became the unit of government and the landowners its financiers. This system worked disastrously badly when put to the test in the Irish Famine of the 1840’s.

Another seminal event was the overthrow of the legitimate King, James the second in 1688, by his usurping son in law, William of Orange.

Among the rights proclaimed by William, to win support against James, were

Interestingly these rights are considered now to be basic “American rights”, but their origin is in the English struggle against James the Second.
William also had the legislation passed which still disqualifies a Catholic from being King of England.

Even in the 19th century, religion, rather than social class, was the better predictor of how the English would vote. Anglicans were Tory, while other Protestant groups tended to vote Liberal, and later Labour.

In the 18th century, 80% of English tax revenue was spent on warfare. In the early 19th century, the “English” Army relied disproportionately on Irish and Scottish recruits. The Welsh were more pacifist inclined.

Thanks to its Navy, the UK became, in the 19th century, the dominant force in world trade. It did 20% of all the trade, and owned 40% of all the ships on the high seas. One has the sense that advocates of Brexit think that that is still the case!
The cost of the First World War was something from which England never recovered. Even by 1929, before the Great Crash, its exports were still 20% below their 1913 level.

England could have made peace with Hitler in 1940, and nearly did so. The world is a better place for the courage they showed in not doing so. Neutrals should not forget that!

England today is living beyond its means.

In 1996 people were saving 10% of their income. By 2007, they were spending it all.
The euphoria generated by an unsustainable balance of payments deficit may lead English voters to make a very bad mistake on 23rd June.

Print Entry
"The English and Their History"Robert Tombs

WHY I BELIEVE THE UK SHOULD STAY IN THE EU