WHAT IS THE ALTERNATIVE TO A HARD BREXIT?

In BREXIT, European Council, Theresa May 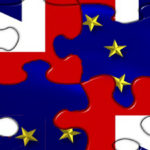 I believe  conditions can be created in which the UK voters could decide not to leave the EU at all.  Ireland should work to create those conditions. The terms for Brexit set out by Mrs May will  do incalculable damage to this island, politically, emotionally and economically.  We cannot simply wait for this to happen. While seeking to mitigate the effects of Mrs May chosen hard Brexit, we must  also do everything we can to ensure that there is no Brexit.

Apart from a few open questions, Theresa May has said what she wants. She wants out of the single market, out of the customs union, and “control” over immigration

The open questions she has avoided so far are about the financial terms of the divorce, the status of EU citizens living in the UK and vice versa, and two aspects of a future trade agreement (if there ever is one), namely arbitrating disputes, and  third country imports getting into the EU via the UK.

It is unlikely that the Article 50 letter, she will send to Donald Tusk next month,will us  tell much more about the UK negotiating position than the Lancaster House speech did. So it is time now to start thinking about how the EU will respond to Mrs May’s letter.

On the present schedule, the European Council would meet in April to agree the orientation it would give to the EU negotiators for the discussions with the UK that would start in June. These orientations would be agreed by consensus, so every EU head of government would have to be satisfied.  For Ireland, this April European Council meeting is potentially the most important European meeting a Taoiseach will ever attend.

In working out the orientation to be given to the negotiators, the crucial thing is for the European Council  to work out what would be it’s ” best alternative to a negotiated agreement” (BATNA). It is important to have an alternative ready because there is every possibility that no agreement will be reached within the two year time frame for negotiation, and ratification, of a withdrawal agreement.

“No deal” would mean the UK simply crashing out of the EU overnight, sometime before the end of March 2019.  This “no deal” scenario would be an overnight halt to flights, to trade and to commerce. There would be immediate, massive currency instability.

From the point of view of pure negotiating tactics, maybe it not surprising that Mrs May would threaten “no deal”.   But to do so, in the absence of a well crafted fall back position, is something  the UK cannot really afford.  It vindicates Tony Blair’s description of the UK government as “not driving the (Brexit) bus”, but rather “being driven” by partisan and ideological forces it has not tried to control .   In the absence of a real alternative to a hard Brexit, it  is on auto pilot heading towards a cliff.

The EU country that would be worst affected by the UK crashing out of the EU, with no deal  is, of course, be Ireland . So Ireland must use all its imagination and ingenuity to see if a creative way out for the UK and the EU can be found.

SHOULD THE EU OFFER UK VOTERS ANOTHER OPTION?

If the UK government is unable or unwilling, because of domestic politics, to work out a responsible “best available alternative to a negotiated agreement”(BATNA), then the EU side should do so for it.  It should adopt it alongside its line by line response the UK’s negotiating demands

Having a BATNA, would also strengthen the EU’s negotiating position. It would provide something with which an emerging deal could be compared. It would also provide a basis on which the UK could reconsider its decision of 23 June 2016, if it wants to do that.

As Tony Blair said, UK voters have a” right to change their minds”. After all politicians are allowed to change their minds, so why not voters?   If  UK voters, in a referendum,  sent their government on a mission towards Brexit, it would be reasonable that the same voters, rather than Parliament, tshould adjudicate on what will have been achieved (or not) by their delegates.

If UK voters ever do change their minds about Brexit, it will happen slowly and incrementally. Parts of the Brexit scenario, obscured during the Referendum, will become clearer during the negotiation. The unavoidable interconnections between EU freedoms, and EU rules, will emerge.   For this to happen, it will be in the EU side’s interest to ensure that there is maximum public understanding of the unfolding negotiation. Transparency will work in the EU’s interest.  A running commentary is exactly what is needed in the interest of public education!

If the alternative to EU rules, is no rules at all, citizens, in both the EU countries and the UK, may come see EU membership in a different light. They may, for the first time in many cases, see the EU as something that simplifies their lives, rather than the reverse.

In my view, the “best available alternative to a negotiated agreement”, BATNA, that the EU side should adopt is an offer of continuing UK membership of the EU  broadly on the basis that the UK  was a member in 2015,  before David Cameron’s ill fated “renegotiation”.

The 2015 terms were generous to the UK. They allowed it to opt out of the euro, of Schengen, of Justice and Policing cooperation, of the Stability and Growth Pact, and of  the justiciability in the UK of the European Convention. Furthermore, the UK itself had also decided, without Brexit, that it would have a referendum of any new EU powers. In that sense the UK was already having its cake, while eating it, before it ever decided on Brexit. These 2015 terms should be left on the table by the EU side, but without the unjustifiable UK budget rebate.

Of course, at this stage, the UK would reject such an offer out of hand.  But, as the inevitable consequences of  Brexit become clearer, UK public opinion might begin to see merit in it, particularly when it is compared with the costs of  simply crashing out of the EU, overnight,  with no deal at all, which is Mrs May’s fall back  negotiating scenario.

The resistance to keeping such an offer on the table is more likely to come from some existing EU member states. Some members will point to the UK’s insatiable demands, when it was a member , for opt outs, rebates, and exceptions.  Arlene Foster’s analogy about feeding crocodiles may come to their minds. They will recall General de Gaulle’s original veto of UK membership, and his foresight that the UK would never settle in as a member. They might also argue that offering the UK a way back, after it has triggered Article 50, might encourage others to try it on too.

But if they sit back and think about it, they will, I believe, conclude that a UK that inside the EU, is better for the EU, than a UK that outside. This will be so even if a trade deal is eventually concluded with the UK. Keeping the offer of resumed UK membership on the table would be good politics, and good economics for the EU.

The terms of the Lisbon Treaty do create some difficulty for this approach.

Article 50 (3) says a country that has sought to leave the EU under that article will be automatically excluded from the EU two years after it has triggered Article 50 unless the EU side “unanimously decides to extend the period”.

Article  50 (5) says that, if a state, that has withdrawn for the EU, asks to rejoin, it has to do under article 49, where the application would have to be ratified by all existing members.

Others may argue that the UK cannot withdraw its Article 50 letter once it has sent it.  This is a matter for the European Court of Justice to decide, but article 6.8 of the Vienna Convention on treaties explicitly allows revocation of a notice of intention to withdraw from a treaty.

These problems are real, but not insurmountable. A political declaration by the EU heads of Government in April  in favour of facilitating an eventual  UK resumption of EU membership, on its 2015 terms minus the budget rebate , would create a realistic basis for comparison in the debate  about Brexit that, in a sense  is only  now starting in the UK.

EAMON DE VALERA, A WILL TO POWER